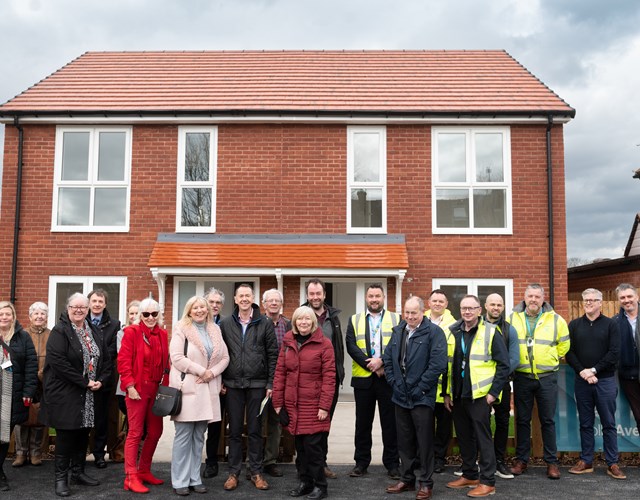 The two properties on Holly Avenue in Cheadle mark a significant milestone in Three Sixty’s growth as the first new build homes developed by the company.

Since forming in 2016, Three Sixty has continued to grow and can now deliver full-scale new build projects. The success of the Holly Avenue development shows the potential that Three Sixty has as a business and signals the first foray into a new avenue of opportunity for the company.

The official opening of the two new properties, attended by councillors from Stockport Metropolitan Borough Council, board members from Stockport Homes Group, and Three Sixty staff.
The two new developments following the official opening ceremony.
The innovative air source heat pump used to keep the carbon emissions of the properties down and to make sure that the houses are economically efficient.
Another view of the spacious social rent properties in Cheadle.

The two properties on Holly Avenue are for social rent and will help meet the diverse housing needs of Stockport Metropolitan Borough Council, housing two small families in a vibrant and thriving community setting. Three Sixty, as a profit-for-purpose company, is committed to making a positive social impact and giving back to the local area, and the latest development shows the continued importance of people to the company’s mission.

In a first for the borough, the properties were built with air source heat pumps to help keep energy costs down and decrease the carbon footprint of the buildings. The installation of air source heat pumps in social housing is a first for social housing in the borough, and another example of the ground-breaking work that Three Sixty have been doing when it comes to housing in Stockport.

The developments at Holly Avenue use air source heat pump technology - a first for social housing in Stockport.

The properties are replacing an unused garage and will bring some life back to what had become the forgotten corner of an otherwise thriving street community. In developing the area, Three Sixty is proud to reinvigorate the local area and to help two small families join the community.

Three Sixty was contracted by Viaduct Partnership to build the properties, with a £126,000 grant from Homes England.