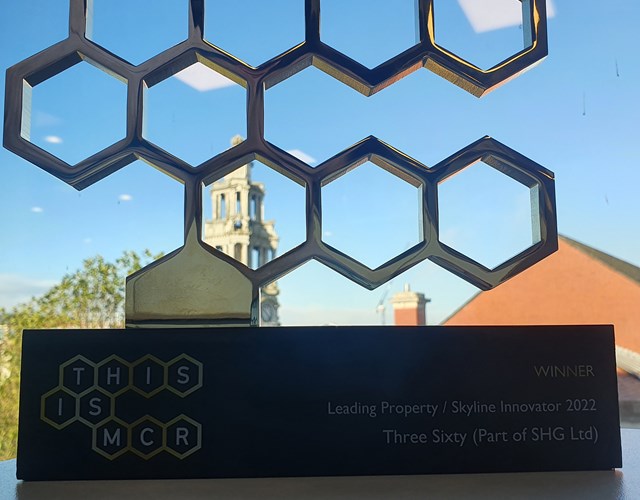 The This is Manchester Awards, which recognise excellence in a diverse range of sectors from hospitality to fashion and sports, aims to celebrate companies from Greater Manchester that make a difference to our city, whatever field they’re doing that in.

Three Sixty’s win in the Property / Skyline Innovator category is a coup for the company; in a region where the skyline is seemingly constantly changing and where there were many worthy applicants, Three Sixty’s win was based on the company’s unique profit-for-purpose model.

John Bowker, Executive Director of Operations at Three Sixty, said, “The This is Manchester Awards are among the most prestigious in the region, drawing leading charities, restaurants, and sporting venues from throughout Greater Manchester; to win in such a prestigious category at the awards is testament to the value that we’ve been able to add – and will continue to add – to peoples’ lives.”

As well as an impressive award win at the This is Manchester Awards, Three Sixty finished in the top ten construction companies nationwide. At the Best Companies Live event, Three Sixty came in eighth place nationwide for construction companies, highlighting the company’s dedication to the community and to its employees throughout a challenging year for the sector. The company’s impressive listing for the second year running demonstrates Three Sixty’s ability to deliver, both externally and internally.

Three Sixty operates differently to other construction companies in the region, donating its excess profits to the charitable arm of Stockport Homes Group, SKylight. Three Sixty delivers value for both clients and for the wider community through its projects, and this innovative business model gave the judges at the This is Manchester Awards reason to award Three Sixty the title of Leading Property / Skyline Innovator. The company’s charitable efforts were also highly commended in the Best Companies top ten listing, with an impressive commitment to community engagement and improvement forming a large part of Three Sixty’s placement.

On the Best Companies listing, Phil added, “We’re delighted to be recognised as one of the best construction companies to work for in the UK once again. The work that we’ve put in to ensuring that Three Sixty is an employee-focused business since our inception has paid off, and everyone at the company can be proud of the environment that they’ve created.”

Since its inception in 2016, the company has grown significantly, recently projecting a turnover of £21m for 2022/3; coming eighth nationally in the recent Best Companies Live event and the This is Manchester Award win show the positive trajectory that the company has taken.